Poker Hall of Famer and former World Poker Tour announcer Mike Sexton has a classic saying about the game of poker: “It takes minutes to learn and a lifetime to master.”

Sexton said that often on the WPT broadcasts in their early years, and it still rings true today. Getting the basics of the game down are pretty simple, it’s learning the intricacies of the game that will take some time to master.

Hold’em Games – Where Everyone Starts to Learn (Now)

Hold’em games – and in particular Texas Hold’em – are where everyone seems to start their love affair with poker. It didn’t used to be that way, however. Many people over the age of 40 started playing poker through one of the Stud variations, and we’ll talk about those here also. But because Texas Hold’em is what people see on television nowadays – and emulating the pros who play that game is what newcomers want to do – it has passed the Stud games in popularity.

Texas Hold’em, not to beat Sexton’s quote to death, is a very simple game to learn. At the table there are three main positions that constantly move – the big blind, the small blind and the dealer button. The dealer button is self-explanatory; it indicates to the table who the dealer is, which is important as the dealer has the advantage of being last to act. The big blind provides something to start the pot – for our purposes, let’s say $2 – otherwise there would be no reason for people to play. The small blind puts up half the big blind – in our case, $1 – and the hand then begins.

Players at the table are dealt two cards face down, with the deal starting to the dealer’s left and moving around clockwise. These are called the “hole cards” and are used by that singular player in the play of the hand. Betting begins to the left of the “big blind” in what is called the “under the gun” or “UTG” position. That player has three options available to them – they can fold their hand and sacrifice any future play in the hand, they can call the big blind’s action, or they can raise the big blind. Depending on the game variant – Limit, Pot Limit or No Limit – that bet may be restricted or not.

After the UTG player has made their choice, the action then moves around the table and each player decides what they want to do. The action comes around to the dealer, the small blind and the big blind. Usually the dealer would have the last decision, but pre-flop the last decisions come on the players who have placed the involuntary bets in the pot – the blinds. The small blind has the option of either calling whatever action has preceded him (if there is a raise, he can call or he can raise himself) or folding and the same is true of the big blind.

If there is more than one player in the hand after the pre-flop action (if there is only one still in, the pot is then shoved to that person – an occurrence that can happen at any point pre-flop, on the flop, or on the additional betting actions), the dealer then lays out the flop. After taking the first card off the deck and putting it to the side – a “burn” card in case anyone has seen it previous to the deal – three cards are laid on the table. These cards are “community cards” in that they are used by all the players to make their best five-card hand. After these three cards are dealt, there is another round of betting, with each player in the hand having the same options – fold, bet (if first in), call or raise – that they had pre-flop.

If there are more than one player left, then another card is “burned” and the “turn” card (also called “Fourth Street”) is added to the flop and another round of betting is conducted. If there are still more than one player in the hand, another card is burned and the final card called “the river” (AKA “Fifth Street”) completes the “community cards” that make up the “board.” Another round of betting occurs and, if there is still more than one player left, the hands are shown; the best five-card hand, either “playing the board” (the five cards turned up), using one “hole card” or using both “hole cards,” wins the pot.

Spread Games – Where Everyone (Used To) Learn the Game

There are those games in which the players don’t have to share cards with the rest of the table. These games are normally called spread games in that the players each receive their own “spread” of cards. With these games, there are primarily two disciplines of poker – Seven Card Stud and Five Card Stud (and both can be played as a Hi/Lo (worst hand Eight or Better) variation).

In Seven Card Stud poker, everyone puts an initial ante up for play, to give people something for which to play. After everyone has anted up, they receive an opening three card deal. The first two of those cards are dealt down to keep them hidden from the other players, and the third card is dealt as an “up” card. After this deal, the betting is opened, with the lowest “up” card having a set bet called the “bring in.” Play then rotates clockwise around the table, with the players having the option of meeting the “bring in” or raising the bet by double. This continues around until either the betting has been completed or there is one player left.

Any remaining players in the hand are then dealt another “up” card called Fourth Street. Another round of betting commences, with the highest hand showing having the opening bet (and, if that highest hand showing is a pair, having the option of a “double bet”). Betting continues until either one person is left or the betting is concluded. “Fifth Street” is then dealt “up” and the high hand once again opens the action, with the betting limit now double what it was on the earlier streets (if the bet limit was $2 previously, it becomes $4). If there is more than one person left, “Sixth Street” comes “up” and another round of betting is conducted. Still have players in the hand? Then “Seventh Street” comes “down and dirty” (face down) and a final round of betting is held. IF there are still competitors in the hand, the players show their down cards and the best five-card hand takes the pot.

Five Card Stud is played in the same way. The opening deal is one card down and one card up, the third and fourth cards are up (with the betting limit raised for “Fourth Street”), and the fifth card dealt down, with a round of betting after each deal. The winner is, as always, the best five card combination.

One of the trickier variants of poker are the draw games. These games – in which there is one or more draws involved – are gaining in popularity because of their complexity and challenge for the player. The player has control over WHAT they are trying to do and are looking to actively make their hands, rather than letting a flop, turn or river card decide what they get. It is also arguably one of the variants that can offer a route to a World Series of Poker bracelet – whereas Hold’em tournaments can number into the thousands, draw games can sometimes only have a couple hundred entries. The reason? The skill involved in draw games.

Normally played as Deuce to Seven Lowball – a poker game in which the object is to get the worst hand possible, in this case 7-5-4-3-2 (because the Ace is played High only) – there can be two variants.

One is Single Draw, where the players are dealt five cards and a round of betting is conducted. After the betting is done, the players then request new cards, turning in cards they don’t want in an attempt to make a better hand. Once the draw is done, then there is another round of betting and, if there are any players left after the betting concludes, the hands are shown. The worst hand shown wins the pot.

Triple Draw is played the exact same way, except there are three opportunities to change cards instead of just one.

For the most part, every game of poker – whether it is the venerable Texas Hold’em or “Baseball” (treys and nines are wild with all fours earning the player another card) – has the same outcome:  make the best five-card hand you can. There are other newcomers that you can learn – Badugi, Baducey and Big “O” (a five-card Omaha variant) which are gaining in popularity – but you won’t find them often in a poker room. Thus, learn the Hold’em and Spread games and a beginner should be an expert in no time. 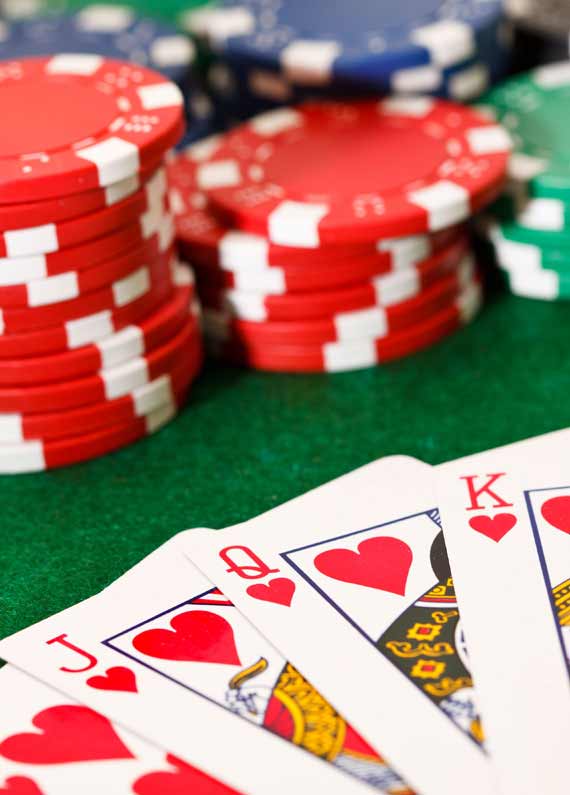